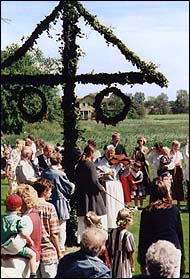 A phallic symbol or just a cock and two balls?

Today is the day that Swedes living in the city instinctively flock in hordes to the countryside, eat lots of food, drink schnaps, drink wine, drink beer, dance around a phallic symbol pretending to be (amongst other things) frogs, drink a bit more and fall over in amusing ways that only alcohol can be the cause of: it’s the day before Midsummers Day.

This is the first year we haven’t been up in the north during this time, choosing the alternative that is Stockholm. We went to celebrate in Södermalm, an island just south of the city centre, and were taken aback by how few people there were. It was like 28 Days Later or such other zombie films, where the main character wakes up, realises there’s no milk in the fridge and trots off to the cornershop where he (it is always a he) gets an eerie feeling that all is not as it’s supposed to be.

We did have milk on this occassion (lots, as it happens), which is where the similarites differ; we also failed to encounter any kind of undead intent on ripping us apart and eating our brains (another difference between the fantasy world of the denizens of evil and our more life-celebrating outing, which I’m rather gald about).

So, walking through town to our destination, Vitabergsparken, was an interesting experience, likened (forget the zombie analogy) to an early Sunday morning. It was only when we arrived at the park that we felt like city-slickers again; music, refreshments, frog-imitating families were all in place. I didn’t dance, not knowing the lyrics or actions, but Jo and Freya hopped a bit.

It was the least stressful inner-city excursion I’ve had the pleasure to be a part of, and one I’d gladly consider doing again.