One of the usual arguments against video games is that they lead to violent behaviour. Several well-known cases of copycat killings do not make the rule. But is there a rule?

A 2004 article in The Guardian shed a little more light on the subject:

The British Board of Film Classification (BBFC) said there was no evidence directly linking the playing of games with violent behaviour.

But some disagree, most notably Craig Anderson, a psychologist at Iowa State University who has published a succession of studies making that link. “Violent video games are significantly associated with increased aggressive behaviour,” he says. “High levels of violent video game exposure have been linked to delinquency, fighting at school and violent criminal behaviour.”

I am not particularly keen on using statistics in arguments. Statstics can be found, used and abused in any discussion: Statistics can support any argument. So, with some hesitance, I enter the discussion.

A (perhaps too) simple question to ask is: If violence in video games is making people more violent, then shouldn’t violent crime rates have increased in tact with the growing number of people playing (violent) games?

According to the Home Office Statistical Bulletin – Crime in England and Wales 2008/09 (page 23), a summary of trends in crime shows this not to be the case. Violent and vehicle-related theft hit a peak in 1995; Since then both of these crimes have decreased year by year, until 2008, where they levelled off. Interestingly, one of the video game industry’s most influentual consoles hit the market a year before the violent crime peak: Sony’s PlayStation.

Our earlier quoted Dr Craig A Anderson has some words to the wise, to help protect us from video game hell:

How can you tell if a video game is potentially harmful?

1. Play the game, or have someone else demonstrate it for you.

2. Ask yourself the following 6 questions:
* Does the game involve some characters trying to harm others?
* Does this happen frequently, more than once or twice in 30 minutes?
* Is the harm rewarded in any way?
* Is the harm portrayed as humorous?
* Are nonviolent solutions absent or less “fun” than the violent ones?
* Are realistic consequences of violence absent from the game?

3. If two or more answers are “yes,” think very carefully about the lessons being taught before allowing your child access to the game.

N:B: At the end of writing this entry, I found a scarily similar article on GameRevolution, the difference being that figures and statistics were taken from the mighty U.S.A.

I’ve been regularly visiting the local second hand shop, Stadsmission, the last month, in search of DVD’s for our daughters and games for me. Thus far I have purchased Dungeon Seige 2, The Sims, The Sims 2, The Sims 3, Command and Conquer – The first decade, Age of Empires 3, Age of Mythology and Civilization 4 – Colonization and Lionheart. All for 20 crowns each. Now that is a bargain.

When I will get the time to play them all is another story, but I am slowly making my way through an earlier purchase, Dungeon Seige 1. It is still a mammoth task ahead of me, especially when Command and Conquer itself is a collection of twelve games. Oh, how I shall suffer. 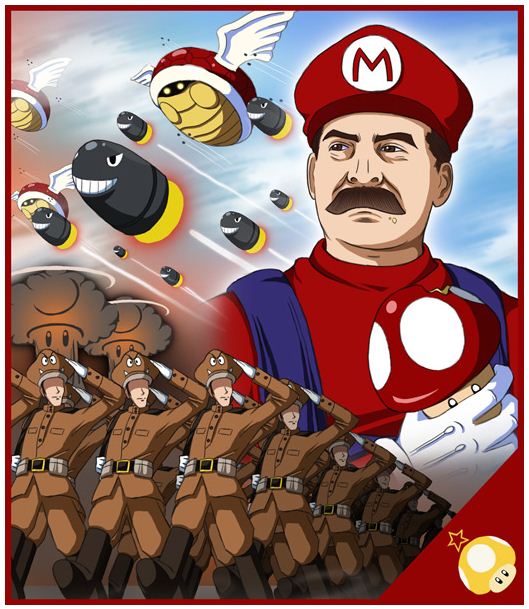 Freya, after twenty-two hours of gameplay your interest in Paper Mario has yet to wane. As a family we are currently well over half way through the adventure. You suggest logical and smart solutions to any problems we encounter; your gaming experience bleeds over into real life, as you readily identify objects around us that resemble the Mario world. And you are able to paraphrase happenings and recall some names of the multitude of different strange characters we meet.

You have also commenced Mario Kart on the Wii. Within a week your ability to steer using the not-so-friendly steering wheel has improved greatly. So much so that the other day you won your first cup. Even though it is far from uncommon for children to show this type of ability, Mum and I are impressed. Oh, and proud.

We have been playing so often that Zelda, now just starting to show her first language development spurt, often says Mario, though she pronounces it” Mao”. Personally I see more resemblence to Stalin, but she is only eighteen months old.

Freya was in the mood to play video games this weekend. It started off with a bit of bowling, tennis and Mario Kart on the Wii. She soon got tired of playing them, and asked if I had anything else. I didn’t think I did have much that was suitable for a five year old, but I found the classic hack and slash (and one of my favourite childhood games). Gauntlet. lurking in a pile of Playstation 2 games. She loved it, and we played for an hour or so, working our way through the never-ending hordes of ghosts, grunts, demons and the like.

After a few sessions of Gauntlet, Freya decided she wanted to try out something else. Jo and I had been talking about introducing her to the world of Mario, so we bought out Paper Mario on the Wii. Not only is Paper Mario typical of the Mario series, with secret areas abound and devilishly wonderful level design, but Mario can flip from a 2D to 3D. Sadly my writing skills are not finely honed enough to comprehensively explain what this does to the game, but it brings a fantastic dimension to the game play, and is a far cry from Gauntlet or Dora that Freya has been playing of late.

Jo, Freya and I played Paper Mario all Sunday afternoon, taking it in turns and helping each other get through the levels. Freya sometimes lacked the self confidence to attempt a few parts of the levels, but generally she picked up the idea and method of control very well. She even managed to keep up her interest through the (way too long) conversations that drove the game forward. And she gave the big boss on the first level the coup de grâce.

Going back to Gauntlet, I used to write a gaming blog. I found this entry about the very version that Freya and I have enjoyed playing:

Gauntlet has been in my top-ten arcade games for as long as I remember. It was with a great deal of pleasure and
anticipation, then, that I went out and bought Midway Arcade Treasures on the PS2. Having played it for 2 evenings
solid, two-player mode, I now realise that Gauntlet is less a game, and more a form of entertainment.

There is, like many other games of its time, no real objective, and no end. The difference with this and its peers is that
there is unlimited life, as long as you had the money to buy extra health. Nearly all the other classics had a “10p for
three lives” premise, which meant that you had to be good to progress and get the high-score. It was not important to be
good at Gauntlet : being rich was good enough.

The console incarnation allows you to add extra health by a simple click of a button, which, for most people, is far too
tempting to ignore.

And so, because of the relative simplicity of the game, after the initial retro-rush, I was left suitably unimpressed. There
was not enough development in the game to warrant my interest. 100 levels was more than enough (and I only played
this much because I was unaware there was no end).

I still have a fondness for Gauntlet, and will still feature high on my list as an arcade-game. I don’t think I’ll be playing the
console version again (until I get Gauntlet 2 on Midway Arcade Treasures vol.2).

Freya has finished her first ever video game on her own. Dora The Explorer – Journey To The Purple Planet. It was hardly the most cerebral of games, being linear and very forgiving, and it’s not her first time playing, either. Oh, no. Since she was about three years old she has been drawn to the Nintendo DS, and has many games which she likes to try out now and again. We’ve played together for many, many hours, and have completed the odd game or two, but this is the first time she did it with almost no help. Once she’d learnt how to save the game the only times I assisted her was when she could not hear what instructions Dora was giving.

I’m currently waiting (and so is Freya, with baited breath) for Singstar Abba to arrive, which will be our next family adventure in video games, although, in fairness, Singstar is more karaoke than gaming experience. Our newly purchased wireless microphones are lying pathetically in the Guitar Hero dual guitar holder that I received for my birthday.

I hope it arrives in time for Saturday’s Eurovision Song Contest qualifier. The two go hand in hand.