Since Freya’s conception I’ve been aware of the importance of iron-levels during pregnancy, making sure Jo not only got an increased amount of iron-rich vegan foods, but which foodstuffs to combine/avoid in order to effect a higher intake of the much-needed mineral; however, it wasn’t until last week I actually bothered to find out why, and what the test results actually mean.

Hemoglobin is an iron-rich protein found in red blood-cells. Its function, amongst others, is to carry oxygen to other cells, like a pizza delivery guy. About 1/3 of a woman’s iron reserves are given to the child, which makes it reasonably vital that a decent iron level is maintained.

Before Jo got pregnant with version 2, her “blodvärde” was around 130. This number represents the number of grams of hemoglobin per litre of blood, and should be between 120 – 150 g/l for women. During her first checkup mid-January her level sank to 111, which was low, but not quite sufficiently so to start taking iron supplements; when Jo was tested a second time, last week, her level had risen to 127. The midwife was, apparently, impressed.

I was going to end this entry with an aside that spinach is not, as everyone believes it to be, a fantastic source of iron, due to it also including a fair amount of oxalates, which inhibit iron absorption. Without doubt, that would have been a perfectly good and informative finishing sentence to an otherwise quite mundane blog, but then I chanced upon MakeupTalk’s forum, that had a question about low hemoglobin:

Just got my blood results back and my midwife said I have low hemoglobin in my blood but its nothing to worry about. Apparantely its caused by lack of iron. Is it safe to take iron/vitamin supplements through pregnancy?

asks ForeverPink, to which one of the forum moderators, Lia, replies:

Every pregnant woman HAS to take iron to supplement the body, because the income by food isn’t enough – to women who doesn’t have anemia, it’s 300mg per day, and for those who have, more. You should take it every day, and it’s at least 600mg if i’m not mistaken.

Check with an ob-gyn about it, because he/she will be able to treat you correctly.

Obviously Lia is talking shite; even capitalising will not make it any truer, Lia. In none of the articles I’ve read has it ever once stated that one HAS to take iron tablets (maybe the law is different in Brazil, which wouldn’t surprise me), with a certain site informing me that one should never take iron tablets if one’s level is not low.

What I found more worthwhile than that nugget of bollocks as an end to this entry, though, was Lia’s forum signature, which comes from the lips of Lia, herself:

Learn everything you can, you never know when you might need it.

There was an interesting interview on gamesindustry.biz a couple of days ago with Harmonix’ (Guitar Hero, Rock Band) Greg LoPiccolo, talking about the future of the rhythm-based music games they produce. What I found most interesting was that a lot of what the interview postulates is exactly the kind of thing anyone who has come over to our flat to play Guitar Hero has discussed.

Obviously, you have spent a lot of time taking existing songs and fitting them into your technology. In the future, do you think the music industry may look towards releasing new CDs that have tracks on the disc “pre-formatted” to work with Guitar Hero or Rock Band?

Due to physical format issues…Having it on the same disc, I’m not sure if that would ever happen. But I can certainly imagine a future of coordinated releases, where some given band may release their content into Rock Band at the same. I think that would make a lot of sense.

Such a method, albeit homebrew, has been implemented in the PC Guitar Hero clone, Frets on Fire, where, with a fair amount of hard graft, individuals can take any song, convert it to a midi file, mess around with the guitar tracks using Fruity Loops (or, I presume, any kind of semi-professional tracker/sequencer), and, with a great deal of admiration on my part, mix it all together in a wok to create a playable version.

Another game that has taken a simplified version of this idea is Wipeout/Guitar Hero/Rez inspired Audio Surf, which “converts” any audio track into blocks which must be collected in a certain pattern over a course. Hmm, I don’t really have the brain capacity to do this game justice in words, so I’ll let the official site explain:

Audiosurf is a music-adapting puzzle racer where you use your own music to create your own experience. The shape, the speed, and the mood of each ride is determined by the song you choose. You earn points for clustering together blocks of the same color on the highway, and compete with others on the internet for the high score on your favorite songs.

Actually, I reckon I did a better job with my game-summary, and with fewer words, but I suppose they were loath to use any Wipeout or Guitar Hero comparison.

Anyway, one further expansion/diversion I’ve been thinking about, especially with the type of music I’ve been brought up with:

Any chance of expanding into other instruments? Perhaps a keyboard?

We get a lot of requests for the keyboard. Who knows? It may happen one day. It is actually conceptually pretty difficult to build in. Most consoles are set up for four peripherals, not five, which means you have to drop something. Which means that the song offering is more complicated.

You know, it is a big commitment. And then the question is, are there enough rock songs with compelling keyboard parts to make it worthwhile? And maybe the answer is yes, but we’ve been pretty busy [laughs] and we haven’t really gotten there yet.

Except I wasn’t actually imagining rock songs with keyboard parts. I remember having a Roland SH-101, which was a monophonic 32-key synth which could be hung around the neck like a guitar, or “keytar” (awful word). No, my proposal is a more keyboard orientated version. Easy songs could include early Depeche Mode stuff, with more advanced Lemonjelly tracks upping the ante a little. And then the Easy mode could be renamed “Andy Fletcher mode”, for the tone deaf or people with complete lack of rhythm (like 2 year-olds). 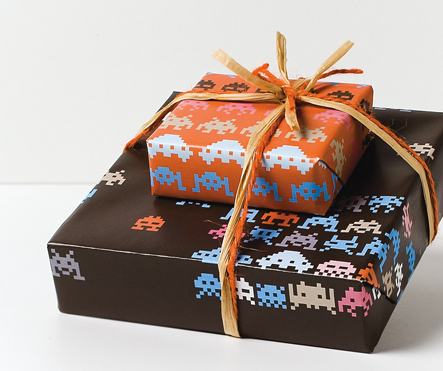 There are two ways to a secure a jubilant Jon at Christmas: buy every game-related item on my wish-list, or take any old shit (carpet-fluff, dog vomit, any Guns N Roses CD) and wrap it carefully in Paper Invaders wrapping paper.

Santa Claus and snowy scenes just don’t stand a chance against this must-have accessory, and it almost seems sacrilege to waste it on something that will end up getting ripped/thrown in the recycling bin after its intended use.

I might just check this site again after the Yule festivities have died down, to see if it ends up in the bargain bins.

The market is awash with gaming-related t- and sweatshirts (with varying quality), but when it comes to surviving the minus 40 winters that the north of Sweden can offer, then there is very, very little in the way of showing your allegiance without freezing your nuts off.

Today I was browsing one of my favourite games-blogs, Wonderland, when I saw an entry that immediately melted my heart. A company called “bits2die4” is selling a range of scarves, all with 70s and 80s style gaming motifs.

Of the five styles being sold, I should like the Space Invaders, Pong and Scramble versions. Space Invaders and Pong are well-known classics of their time, and I have very special memories of playing Scramble in Bournemouth when I had just become a teenager. I have a feeling I played most in the back section of a chip shop, where both Scramble and Space Invaders stole a fair bit of my free-time and a lot of my pocket money.

These scarves ooze style, and the only thing preventing me from fetching my credit-card right now is that they are made of wool. I may find myself wrestling with my vegan conscience over this one, and I wouldn’t be surprised if I were to let slip my ideology just to own these little chappies.

I suppose I could live easier if, say, I received them (notice the plurality) as a Christmas or birthday present. I’m not saying this would be acceptable (it would, though), and I really hope that I get them some time in the near future.

Let’s just hope that no-one evil reads this who wishes me to look wicked and feel shit.

The war is already lost. The film and music industry will demand sacrifices, nonetheless, though their attempts are pitiful. As if trying to make a point that ANY amount of illegal filesharing is worth the fight, several “pirates” were convicted and fined this week for sharing one film and four songs between them.

Coming to their aid is delaut.se, who insure filesharers against such fines for a minimal monthly fee. A one-month packet costs £1.50, while a year’s insurance is £9.

This type of organisation isn’t the first in Sweden. Planka.nu is a similar idea for those willing to shirk payment on public transport. For 6 months of protection one pays about £35, less than the cost of one month’s legal travel. Tagen.se is another such site for drivers who get caught for speeding

It surprises me that these type of ideas do not become illegal. Planka.nu has been in operation since 2001; however, with the newly elected Moderates taking power from the Social Democrats, this may be a short-lived

Interstingly, planka has about 600 paying “members” per month, whilst the nascent delaut about 2000.