Our friend has just got together a new site, junkfood, as a voice against the companies (and their products) that are contributing to the general degredation of our planet. It’s still very much in its infancy, and it’ll be interesting to see how it develops.

Jack’s new arrival has renewed my own interest in fast-foods and consumer power. I’ve found myself, over the last few days, scouring old haunts to find some worthy news with which to present to Jack. It didn’t take me long to find numerous accounts of woe, and made me realise that during my absence from my anti-multinational days not much has changed.

Still, I intend to become more aware of this continuing problem, and should like to aid Jack in his quest. The only problem I see is that of time, and I don’t quite know how he manages it. He has two kids, his own company, several blogs, martial arts and probably a myriad other things to eat away at this day. This guy does drink coffee by the gallon, but even caffeine has its limits. 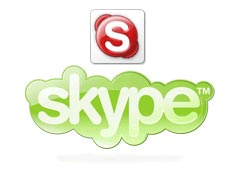 I can wholly understand why ebay bought Skype last month. If I’d had the $2.6 billion dollars available I’d have considered the purchase myself. Not, however, because of the free calls one can make to other Skype users, nor for the sound quality that befits a broadband connection.

No, I love Skype because it’s (possibly) the only polite answer you can give to the sales reps of telephone companies who ring up and ask you if you’re interested in what they have to offer because it beats “X”, their competitor by five…oh, Skype? In that case I wish you a good evening. Good-bye.

The four or five times we have had such calls have always, always, ended quickly and without argument. Skype, I salute you.

After many years of keeping myself away from animal rights, I’ve decided to give a bit of time to something that is very close to my heart. A Swedish group, vegan.nu, have recently been asking for a Swedish/English translator for their imminent site reorganisation. Since I fit the bill, I wrote to them offereing my services, and shall soon be assisting them.

Strange but true, the German chapter of People for the Ethical Treatment of Animals (PETA) has coerced Mercedes to offer a non-leather (meaning seats, of course) version of their vehicles.

While this is a small, and some would say ridiculous, victory, it still remains a step forward. The only question is, how many potential Merc owners are conscientious enough to show their displeasure at the leather industry?

Now, if the same set of circumstances had occured with Peugot’s 2CV…

Dowloaded Trillian Pro again, will have to see how well it works with audio and Webcam as this new version offers this for the first time.